The Kewpie Group conveys food safety and security and the enjoyment and importance of food through food educational activities. We launched "Open Kitchen" factory tours in 1961, and since 2002 we have sent instructors to elementary schools throughout Japan to run "Mayonnaise Classes."
We also provide food-related information. We have established new dietary education content on our website, such as the "Food & Life Academy," and conduct "media library activities" where we distribute DVDs free of charge to schools and consumer centers that support the development of a healthy mind and body.

Kewpie believes that the factory is an extension of the kitchen at home and accordingly calls its factory tours for the general public an "Open Kitchen" tour. We believe these tours present the best opportunity for our customers to see how products are made, to gain a better understand of the products, and to feel more assured about their use.

Kewpie launched Open Kitchen factory tours in 1961. It was rare at the time for food industry companies to open production sites to the public, and our tours were initiated as part of social studies field trips for elementary school students.
We are now offering online tours for customers who are far away, have difficulty leaving the house, or live overseas.

We have established a variety of nutritional education content on the official Kewpie website.
We continuously add useful information and enrich the content so that children can learn independently and have fun together.

In Japan, it is reported that approximately 5.7 million tons of still edible food are wasted annually (estimated in 2019 by the Ministry of Agriculture, Forestry and Fisheries). Conversely, there are many people in Japan who do not have enough food to eat. In 2007, Kewpie began supporting Second Harvest Japan, an authorized NPO that supports food banks*1 and now donates products through 15 food bank organizations nationwide. This activity has spread to all Group companies.
We have also begun new initiatives, such as donating products to MOWLS*2, a nationwide cooperative that supports food access activities launched through the Kewpie Mirai Tamago Foundation.

*1Food banks accept factory seconds produced during food manufacturing and provide them free of charge to persons in need and welfare facilities such as foster centers.

*2MOWLS: A system operated by Meals on Wheels Japan that supports the creation of an environment where everyone, from children to the elderly, can gather at "places for them" across Japan, such as children's cafeterias.

Lifestyles and diets have diversified rapidly in recent years, but this shift has been accompanied by increasingly serious social issues surrounding food, including a decline in food knowledge and interest particularly among the younger generation, the dwindling of mealtime communication, and child poverty. Based on the spirit of contributing to society through food that has driven Kewpie's business activities since the company was first founded, in April 2017 we established the Kewpie Mirai Tamago Foundation*. Through wide-ranging support for the activities of like-minded groups, we hope to accomplish a level of social contribution not achievable by a single enterprise acting alone. As well as conducting our own dietary educational activities, we take a long-term perspective on creating healthy and sustainable societies.

*Since April 1, 2019, the Kewpie Miraitamago Foundation switched to a Public Interest Incorporated Foundation. 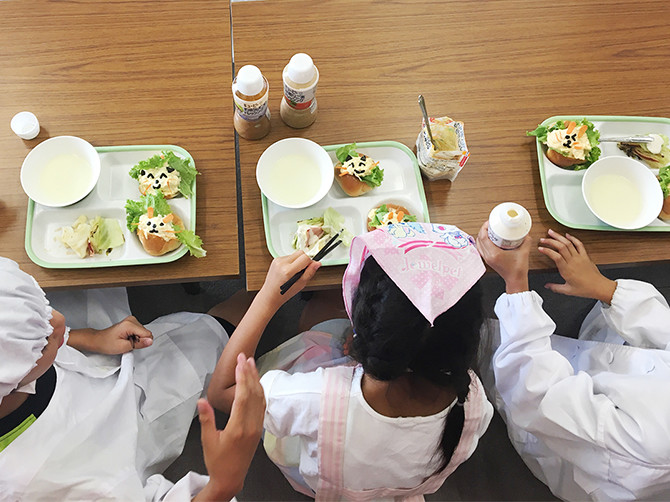 The main focus of this foundation is donating to organizations that create meaningful spaces in which children can relax and gain a stronger sense of belonging through food, such as those devoted to food education and the Kodomo Shokudo Network. Held activity report meetings and lectures from those involved in the management and support of initiatives such as Kodomo Shokudo on the role of children's cafeterias and the importance of hygiene and food education as part of a course on establishing meaningful spaces for children.

The Bellmark campaign originated from the desire to provide an equal education for all children in a rich and prosperous environment.

Being sympathetic to the spirit of this campaign, the Kewpie Group has cosponsored the Bellmark educational aid foundation since its beginning in 1960 and cooperated in educational support activities for participating schools, etc.

We will continue to back this campaign, which supports a wide range of social education activities.

Kewpie Products and the Bellmark